Modelling of an aeronautical electrical network in Synopsys SABER

Synopsys SABER was adopted in the frame of Clean Sky MAS DE NADA project, for modelling a full aeronautical electrical network, including generation, conversion and distribution sections. The model has been input for a software developed in MAS DE NADA, used for the analysis and optimization of the electrical network in terms of power quality and stability.

Modelling of an aeronautical electrical network in MODELICA 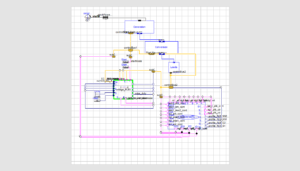 Modelling of DC/DC converters in MATLAB

DC/DC converters are essential part of power distribution onboard aircraft. Control strategies are usually required for optimal control of such equipment, achieving at power quality standard achievement. Moreover, innovative control algorithms can be designed in order to implement energy management strategies. For the aims of Clean Sky 2 ESTEEM project, a model of DAB (Dual Active Bridge) was developed in MATLAB to serve as a basis for development of advanced control strategies. 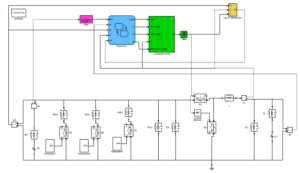 Traditionally, PI and PID controllers are adopted for the control of aeronautical DC/DC converters and for Generator Control Units (GCU) design. These controllers are enough for satisfying common requirements, such as regulation of output voltage/currents in static environment. In recent times, the need for more advanced control strategies raised up, due to the introduction of new electric systems onboard thanks to the More Electric Aircraft concept development. Among these control strategies, sliding mode is suitable due to excellent properties of fast reference tracking and robustness against disturbances. Control algorithms for different types of DC/DC converters have been developed, in collaboration with the Second University of Naples as strategic partner of the company, as main part of various research activities. 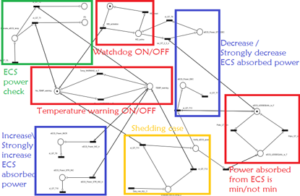 Achieving fuel savings is critical for the aircraft industry. One of the available methods for aiming at better performances in flight is related to the optimization of the power flows onboard. Aeromechs has been involved in this topic since its foundation, aiming at designing energy management strategies dedicated to aircrafts. As a distinctive example, in Clean Sky I-PRIMES research project, a system composed by three Buck DC/DC converters and a Supervisor embedding energy management logics was designed and tested on ground, at Safran CopperBird laboratories (Paris).

Similarly, in Clean Sky EPOCAL project an Electrical Power Center (EPC) was designed and enhanced with energy management strategies operating in real-time. The EPOCAL equipment was integrated on an ATR-72 and the energy management logics tested in flight operations, during a dedicated test campaign carried out at the ATR site of Toulouse.

Any modern complex electronic equipment, such as DC/DC converters, AC/DC rectifiers, DC/DC inverters and more, requires ECU (Electronic Control Units) for operations control and supervision. Typically an ECU firmware is composed by hundreds or thousands of lines, and cannot be subject to bugs or unknown states in order to avoid critical losses during flight operations. Aeromechs developed a methodology for semi-automatic firmware generation dedicated to aeronautical equipment, fully compliant with DO-178B/C standard, able to optimize the produced code at full performances. Such methodology, based on mathematical tools as hybrid systems and Petri nets, has been successfully applied in Clean Sky I-PRIMES project, producing an error-free supervisor in just a portion of the times usually required with by-hand coding.

Hardware in the loop testing of aircraft controllers 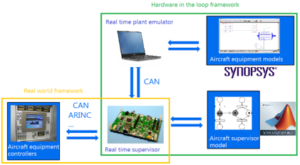 Once generated, the produced firmware should be tested against stressful stimuli. This is a critical aspect of the firmware, where also the necessity of anticipating potential issues of the real hardware equipment is central. Hardware-In-the-Loop (HIL) is a technique that is currently used for the testing of control systems which are used for the operation of complex machines and systems. Aeromechs developed innovative HIL techniques for the testing of ECUs dedicated to aeronautical equipment. A mixed approach involving real control boards and simulated equipment, based on the CAN communication protocol, was proposed in Clean Sky EPOCAL project. In details, a supervisor embedding an energy management strategy was built in Labview and included in a Compact Rio real-time system. The testing activities required an HIL framework, where the Compact Rio board (successively included in the real EPOCAL equipment) was connected to an external laptop embedding MATLAB models of the aeronautical electrical network equipment, and the communication was performed via CAN.